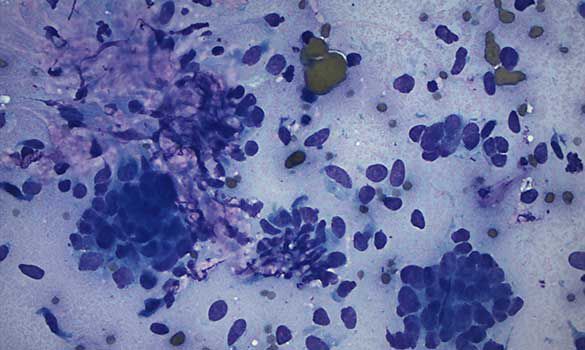 An aspirate from the right thoracic mammary gland

There are 2 populations of cells:

The most numerous are spindle cells scattered individually or in aggregates admixed with scant to moderate amounts of pink extracellular matrix material. The cells exhibit mild nuclear size variation.

The other population is epithelial, occurring in sheets and clusters. Nuclear-to-cytoplasm ratio is high: cells have dense round nuclei with scant amounts of basophilic cytoplasm, with little apparent cell or nuclear size variation.

Together with signalment and history, a working diagnosis of mammary fibroepithelial hyperplasia was made.

Feline mammary fibroepithelial hyperplasia (FEH), also known as fibroadenomatosis or feline mammary hyperplasia, is a hormonally-mediated, non-neoplastic proliferation of one or more mammary complexes without milk production. Both ductular epithelium and mammary stromal components are represented on cytology.

The condition typically occurs in young, estrous-cycling female cats less than 2 years of age. It can also be seen in pregnant or pseudopregnant queens, and spayed female (or even male) cats receiving progestin-based drugs.

When only a single mammary complex is affected and/or, if it occurs in older female cats, it may be difficult to differentiate from mammary neoplasia. In these instances, histopathology is necessary to make a definitive diagnosis.

Dr. Tan received her DVM from the Ontario Veterinary College in 2000, and was in companion animal/emergency practice for 5 years in the Pacific Northwest before returning to complete a DVSc in clinical pathology in the Department of Pathobiology, OVC . She became a Diplomate of the ACVP (clinical pathology) in 2009. From 2009-2013, Dr. Tan worked in the Department of Pathobiology, teaching clinical pathology to veterinary students, mentoring pathology graduate students, and performing diagnostic work for OVC Health Sciences Centre cases. Dr. Tan joined IDEXX in 2013.

Her special interests include hematology and oncology. When not working or reading, Dr. Tan enjoys spending time with her husband and two dogs, Winnie and Telly.