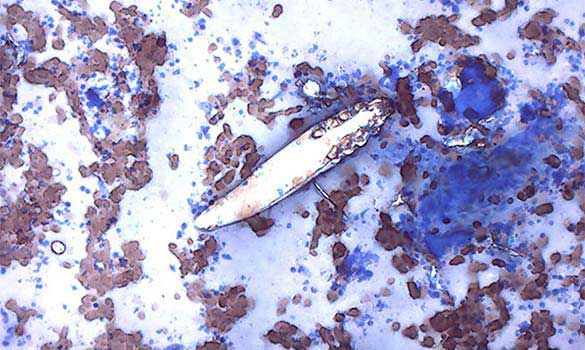 The skin scraping had several Demodex spp. mites distributed throughout a mixed inflammatory population consisting primarily of neutrophils and macrophages, with fewer eosinophils.

Low numbers of Demodex canis mites are a normal inhabitant of the hair follicles of dogs, but they usually aren’t found on skin scrapings of normal animals--therefore, the presence of multiple mites is consistent with demodicosis (demodectic mange). In this case, there was also a secondary bacterial pyoderma which is commonly found in these patients.

Demodicosis is a common canine skin disease, and can occur as either localized or generalized disease. The localized form of demodicosis occurs in juvenile animals and is usually self-limiting, although treatment will likely be needed if the ear canals are involved even when the disease is localized to that area. The generalized form of juvenile-onset demodicosis appears to have a genetic component, speculated to be an immune-system dysfunction, since certain breeds are reported as more susceptible, such as the Shar-pei. Most cases of generalized juvenile-onset demodicosis will require treatment, although it may be self-limiting in some young dogs (< 1 year of age) if they are only mildly affected.

Adult-onset demodicosis is less common than the juvenile form and doesn’t have breed associations. It is typically generalized, tends to be more severe than the juvenile form, and requires treatment. Adult-onset disease can occur in association with a variety of systemic illnesses (e.g. hypothyroidism, hyperadrenocorticism) or with immunosuppression, although it is not clear whether mite overgrowth is a direct effect of the concurrent illness if one is present.

Deep skin scrapings are preferred to other test preparations (e.g. plucked hair) for diagnosis of demodectic mange. It can be helpful to firmly squeeze the skin prior to scraping to expel mites from the hair follicles. The eight-legged adult mites are most commonly found, although less often eight-legged nymphs, six-legged larvae or eggs may be seen.

Dr. Fierro received her DVM from Colorado State University in 2008. She then completed a clinical pathology residency at Michigan State University and became board-certified in clinical pathology by the American College of Veterinary Pathologists. Dr. Fierro joined IDEXX at the Johannesburg, South Africa laboratory. In 2014, she transferred to IDEXX Canada's laboratory in Delta, British Columbia. Dr. Fierro lives with her husband and two cats, who are now veteran world travelers.

To protect the confidentiality of our customer and clients, the background information in each case has been slightly modified.