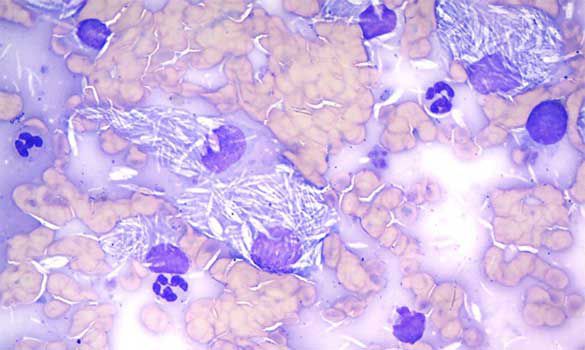 The majority of nucleated cells are inflammatory and consist of a mixed population of nondegenerate neutrophils and vacuolated macrophages, with fewer small well differentiated lymphocytes. Many of the macrophages contain numerous small, rod-shaped, negatively stained structures. Similar structures are found free in the background of the slide.

The acid-fast staining was positive, confirming that the negative-staining structures are Mycobacterium sp.

The negatively-stained bacteria are compatible with Mycobacterium sp. Several Mycobacterium species can cause disease in animals. Notably, three different types of disease are recognized:

In this case, the patient’s presentation is most consistent with leprosy.

Most cases of feline leprosy are associated with Mycobacterium lepraemurium, which causes single or multiple granulomas to develop in the skin or in the subcutaneous tissues, often on the head or forelimbs. Sources of infection can include rodent bites, insect bites, and environmental contamination of wounds. Local lymphadenopathy can occur in later stages of the disease, but systemic involvement is rare. Feline leprosy is not typically regarded as zoonotic.

Diagnosis of feline leprosy usually requires microscopic identification of Mycobacterium sp. organisms on impression smears, fine needle aspirates, or biopsies from infected tissues. Pyogranulomatous inflammation is also typically observed in these samples. The organisms may be present in variable numbers and, when they are scarce, acid fast (Ziehl-Neelsen) staining may be useful in exposing them. Culture of the organisms from a biopsy (or aspirate) is a less sensitive diagnostic tool, as many species of Mycobacterium sp. are fastidious, slow-growing species. The diagnostic test of choice to speciate mycobacteria is PCR.

Surgical removal of nodules may not always be curative; therefore, additional antibiotic therapy is recommended. The long-term outlook for most cats diagnosed with leprosy is good.

Dr. Kowalewich received her DVM from the Western College of Veterinary Medicine at the University of Saskatchewan in 1988. Following graduation, she completed an internship and residency at Purdue University. In 1992, she attained diplomate status with the American College of Veterinary Internal Medicine, specializing in small-animal internal medicine. For 7 years, Dr. Kowalewich owned her own internal medicine consulting service and radioactive iodine unit. She has been with IDEXX at the Delta, British Columbia, laboratory for more than 13 years and became board-certified with the American College of Veterinary Pathologists in 2008.

Dr. Kowalewich loves living on the West Coast with her young daughter, dog, cat and hamster. In her spare time, she enjoys cooking, skiing and hockey.

This case study was prompted by a real submission to an IDEXX Canada pathologist at one of our reference laboratories.