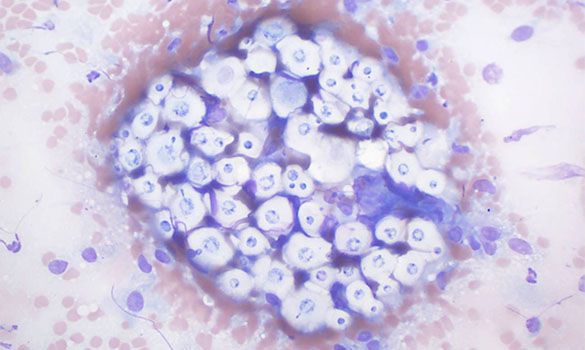 The slides were of relatively low cellularity with small amounts of blood. Nucleated cells consisted of macrophages and neutrophils with fewer small lymphocytes. There were low to moderate numbers of round yeasts admixed among the inflammatory cells. These had a thick clear capsule surrounding a round purple-coloured structure with a distinct cell wall. Narrow-based budding was observed in several organisms.

Interpretation: Findings were consistent with Cryptococcosis.

Cryptococcus neoformans is found in the guano of many bird species as well as in decaying plant matter. Cryptococcus gattii, of emerging concern in the last decade in British Columbia, can be found in freshwater, seawater, tree bark, and in the air. Cutaneous infection with Crypcococcus spp. occurs via direct inoculation with fungal spores from the environment.

The distinctive capsule of the yeast is considered protective, helping to prevent destruction by the host immune system. Despite this, cytologic preparations from cutaneous and visceral lesions are often accompanied by a mixed inflammatory infiltrate.

This particular dog had a positive serum antigen titer of 1:2048, supporting systemic exposure to the yeasts. The lump was excised and systemic antifungal therapy was instituted. No further follow-up information was available at time of publication.

Dr. Flint received her DVM in 2006 from Tufts University and completed a residency in clinical pathology at Michigan State University in 2009. She is board-certified in clinical pathology by the American College of Veterinary Pathologists. Dr. Flint joined the IDEXX lab in Delta, British Columbia, in 2009. Her passion for veterinary diagnostics began while working in a laboratory prior to vet school.

Outside of work, she enjoys trivia, baking, and travel, and spending time with her beloved chocolate lab, Lily.

To protect the confidentiality of our customer and clients, the background information in each case has been slightly modified.