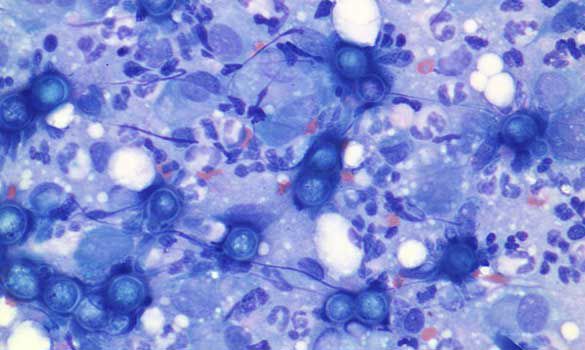 An aspirate of the consolidated lobe that was performed.

The aspirate is highly cellular with a mixture of non-degenerate neutrophils and epithelioid macrophages.  Large numbers of 12-15um round basophilic yeast with a thin wall are present and often found in pairs.

Blastomycosis (Blastomyces dermatitidis) is a systemic fungal infection acquired from soil, most notably in river valleys of the Eastern United States and parts of Canada.  After infection establishes itself in the lungs, it disseminates throughout the body.  Skin, eyes and lymph nodes are the most common sites of dissemination in dogs but any tissue can be affected.  While mostly found in dogs, infection has also been reported in cats and other species.

Cytologic identification of the yeast from skin nodules and lymph node aspirates is a quick and reliable method of diagnosis, although organisms are not always present.  Lung washes can also produce a cytologic diagnosis but less reliably: only 40% of confirmed respiratory cases reveal organisms with lung washing.

Other diagnostic options include urine antigen testing (a quantitative, non-invasive and sensitive method) and PCR testing (sensitive method if the sample contains organisms).  Serology is often inadequate for diagnosing Blastomycosis with low sensitivity.  Culture is not recommended since the cultured form is zoonotic and most veterinary laboratories are not licensed for this procedure.

Treatment of Blastomycosis predominantly relies on azole medications and is often prolonged, lasting months.  The prognosis is variable, depending on the severity of the initial infection and the tissues affected.

Dr.Webb is a native of Ottawa and received her DVM from the Ontario Veterinary College in 2003. She practiced in the Ottawa area for 2 years before pursuing a residency in clinical pathology at the University of Georgia. She became a Diplomate of the American College of Veterinary Pathologists in 2008 and worked as a clinical instructor at the University of Wisconsin-Madison from 2008 to 2015: performing diagnostic service, training residents and teaching veterinary students.  She joined IDEXX in February of 2015.

In her spare time, Dr. Webb enjoys spending time with her dogs and staying active by cycling, swimming, and playing hockey and soccer. She also enjoys gardening in the summer as well as working with stained glass during the winter months.